Australian home borrowers could be forced to sell their homes if interest rates continue to rise and make it harder to repay their loan, according to a new survey.

The financial comparison group Finder estimates that 145,000 homeowners, or about 5% of people with a mortgage, would be in this situation if interest rates increased by three percentage points.

“After another increase in cash rates, mortgage payments for many borrowers are higher than they were a few months ago and are expected to rise further this year,” he said.

“During the remainder of 2022, many variable rate homeowners will start to struggle more, and we will likely see the number of defaults increase.”

Borrowers in May, June, July and August have already taken 1.75 percentage points of Reserve Bank rate hikes, the biggest increases since 1994.

Australian home borrowers could be forced to sell their homes if interest rates continue to rise and make it harder to repay their loan, a new survey has found (pictured at an auction in Melbourne)

ANZ Bank expects the cash rate, now at a six-year high of 1.85%, to reach a 10-year high of 3.35% by November, with bigger rate hikes by 0.5 percentage point in September, October and on Melbourne Cup day.

That would mean borrowers would have seen 3.25 percentage points in rate increases in just six months, with the RBA ending the era of the record 0.1% cash rate in May.

This prediction, if it materialized, would see a borrower with an average mortgage of $600,000 pay $1,060 more each month on their repayments compared to May.

Since November last year, banks have been required to assess a borrower’s ability to meet a three percentage point rise in mortgage rates, under Australian Prudential Regulation Authority rules.

ANZ and Westpac expect the Reserve Bank to stop tightening monetary policy once the cash rate hits 3.35%, but the 30-day interbank futures market expects a cash rate by 3.7% by April 2023. 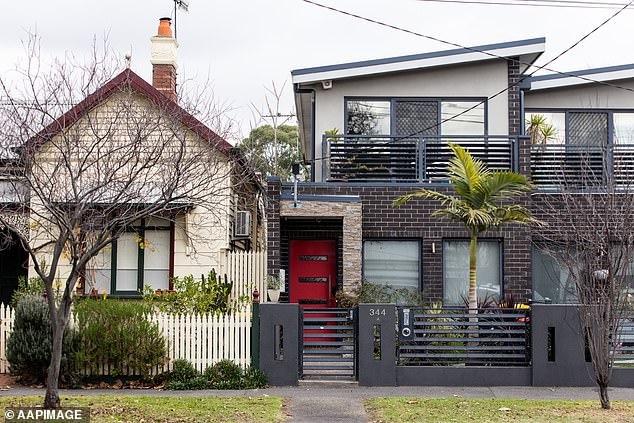 Financial comparison group Finder estimates that 145,000 homeowners, or around 5% of people with mortgages, would be in this situation if interest rates rose by three percentage points (pictured are homes in Melbourne )

The Finder survey of 308 Australians with a home loan found that 48% would need to cut spending while 14% would struggle to pay their mortgages and bills.

The 5% who feared having to sell their home were estimated at 145,000 home borrowers.

People in this situation would be forced to do so in a falling market putting them in a situation, known as negative equity, where a borrower owed more than their home was worth.

Banks are now much tougher on borrowers with a debt-to-equity ratio of six or more, the level APRA deems risky.

Australians who borrow the maximum amount allowed are now told they must give up having a credit card.

Ratings agency Moody’s Investors Service said tougher rules were needed to reduce the risk of default when a borrower is 30 days or more behind on their mortgage payments. 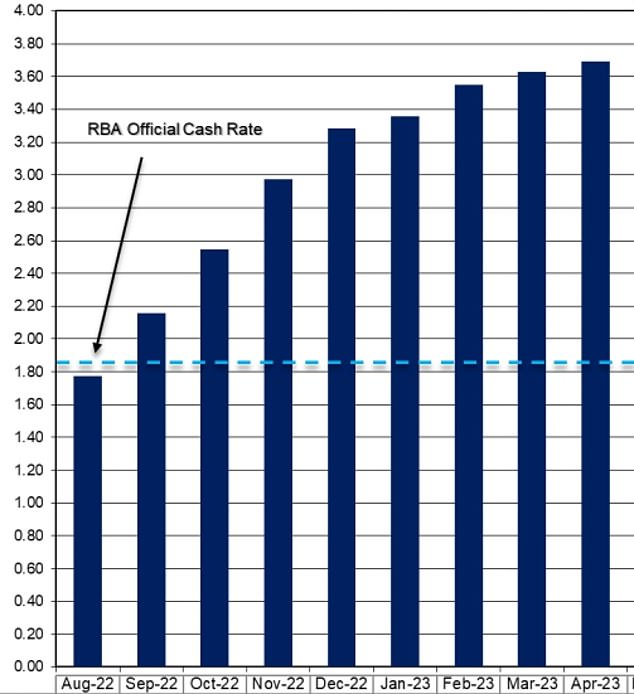 ANZ and Westpac expect the Reserve Bank to stop tightening monetary policy once the cash rate hits 3.35%, but the 30-day interbank futures market (graph from the Australian Securities Exchange, shown) expects cash rate of 3.7% by April 2023

Moody’s said delinquency rates are expected to “increase moderately over the remainder of the year as rising interest rates and rising costs of living weigh on the ability of borrowers to repay debt.”

But the rating agency has calculated average default rates of two to four percent, over the past five years, for non-conforming loans, where borrowing criteria are not as stringent as the big banks.

The Treasury and Reserve Bank expect headline inflation – also known as the Consumer Price Index – to hit a new 32-year high of 7.75% by the end of this month. 2022.

Calculations based on the cash rate dropping from a record high of 0.1% in May to 3.35% in November, as forecast by ANZ. Monthly repayments based on popular Commonwealth Bank floating rate increase from 2.29% to 5.39% expected